How Would You Like to Spend a Year in Sunny Kathmandu? 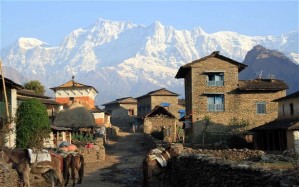 It was a typically cold winter day in Minneapolis, and my wife Michelle and I were sitting across from each other at a Himalayan restaurant, which was helpfully named “Himalayan Restaurant.” There was a picture of Nepal hanging on the wall, looking very much unlike Minnesota, for better and for worse. I wasn’t really planning to ask Michelle that night, but since I assumed she would think I was certifiable anyway, I went for it.

“I have a question for you.” I tried to be offhand, half expecting to be laughed at. “If you had to spend a year in Kathmandu, what would you do?”

Presumably this is where the laughing would start. I braced myself. This was probably a stupid idea anyway.

“You mean for work? Well, I’d probably work on starting a freelance career. There’s always work somewhere, and if nothing else I could teach English or maybe even tend bar. Maybe not in Kathmandu, though. Why?”

Well, that was unexpected. Now what?

In the preceding months, I had been holed up in a cattle pen with computer terminals, doing thankless and low-paid contract work, trudging through a mile of snow every morning to clock in. It beat unemployment (just), but I figured there had to be something better out there, and I started planning how I might find it. First, I needed to get off the treadmill of terrible jobs leaving me stuck where I was, but that would either require lots of money I didn’t have or a drastic cutback in expenses. Second, I needed a new means of getting by that didn’t involve pseudo-lawyering or contract jobs.

Some very close friends of mine had recently gone on a honeymoon to southeast Asia, and their report included tales of $2 meals, $10 rooms and 50 cent beers, all with great weather and sea views. Doing some quick math, I figured I could live very well on half my current spend, and if I had a Minneapolis budget, I’d live like a king. Travel to and from this low-budget paradise seemed to be the largest single expense. This was just what I looking for. This would allow me the breathing room necessary to change careers, start writing, and as an added bonus, see the world. I felt like I was onto something.

In the time that followed, I learned just how seriously Michelle had taken me. We went through a flurry of planning. I was providentially able to completely change careers anyway, going from being a lawyer to being a software developer. We decided on southeastern Europe instead of Asia, though Nepal will still be there when we finally get around to visiting. And after a long time planning budgets, visas, and travel, with more than the occasional daydream thrown in, we are ready to go.

That was more than two years ago. Next week, Michelle and I get on a plane with no ticket back.

This blog will contain the story of a couple of travelers somewhere between expats and tourists. We hope you’ll follow along.

Tags: About, Minnesota, Nepal, Why