Take a Long Walk Off a Short Bridge

There aren’t that many more confusing places in the world than Bosnia and Herzegovina. Sure, we’ve all heard about it, from those news stories that I didn’t pay attention to when I was a kid. (I give myself a pass. I was young.) Generally, we know that it used to part of Yugoslavia and that they had a pretty terrible war in the 1990s. If you live in Dayton, Ohio, you may even be familiar with the peace treaty that brought that war to an end, the Dayton Accords.

All of this is to reduce Bosnia and Herzegovina to terribly simplistic terms, and so I apologize in advance for continuing to do so. Because while I’d love to write more about this beautiful, hospitable, and really, really confusing country, I just don’t have time.

And I have only been to a couple places in the entirety of this varied country. One of those is pretty iconic, though: Mostar.

Part of the southern part of the country, Hercegovina (yes, they spell it with a “c”), you have probably at least seen pictures of Mostar, a town set dramatically in the middle of a canyon with a cold river flowing through it. Most likely, you’d remember the pictures of Mostar if you saw the bridge. We can’t talk about Mostar without talking about the bridge.

It is called “Stari Most,” or simply “The Old Bridge.” Of course, there’s nothing terribly old about it, given that it was blown up in 1993. (Let’s add “destruction of our cultural heritage” to the endless list of depressing reasons that we should all be anti-war.)

However, it’s a piece-by-piece rebuild of the old Old Bridge, using the same materials and construction techniques. Hungary even sent a squad of its Army’s divers to salvage much of the original stone from the river, so when they say “same materials,” they really do mean it. Any stone they needed to replace was pulled from local quarries. 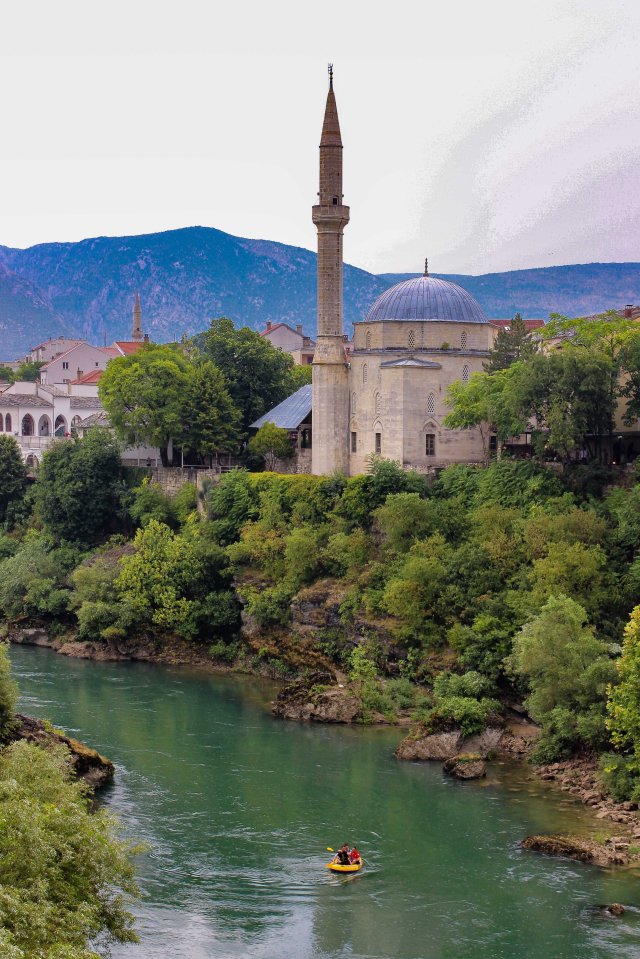 They even used a Turkish company to do the construction, which seems appropriate since it was the Ottomans who built the bridge in the first place, in the 16th century. Mimar Hayreddin was the original designer, and he was a student of the great Mimar Sinan, the archetypal architect of the Ottoman Empire. Incidentally, “mimar” means “architect” in Turkish, and it’s used as a professional title in this context, not a given name.

I was told the bridge rises about 23 meters above the river below, depending on the water level. It is a rite of passage for young men to jump off of it, although literally anyone is allowed to if they pass the training given by volunteers from the Mostar Diving Club on the 10-meter platform downriver. Of course, the Mostar Diving Club is made up of anyone who’s jumped off the bridge.

It’s all a bit fly-by-night, actually, and I’m dying to do it myself. I spent almost the entirety of my second visit to Mostar berating myself for being unprepared to actually jump off the damn bridge.

I will admit to some trepidation about it when I actually looked down at that river from the middle of the bridge. I measured it out and that’s about the same as jumping off a sixth or seventh story balcony. Not something I do every day. But hey, people aren’t killed from jumping that often.

Still, it sounds like something crazy enough for me to actually do. If I ever make it back, I think I’m going to jump off that bridge. If you’re in the neighborhood and don’t want to live with regrets, go to the Mostar Diving Club office at the end of the bridge and just ask somebody. Go in the morning and bring your swimming gear. It’s a cold river, so try to pick a hot day.

If you’re in the neighborhood and okay with regretting things, Mostar is still absolutely worth a visit. Those of you with vertigo might try visiting the much smaller Crooked Bridge, which may be more pleasant. 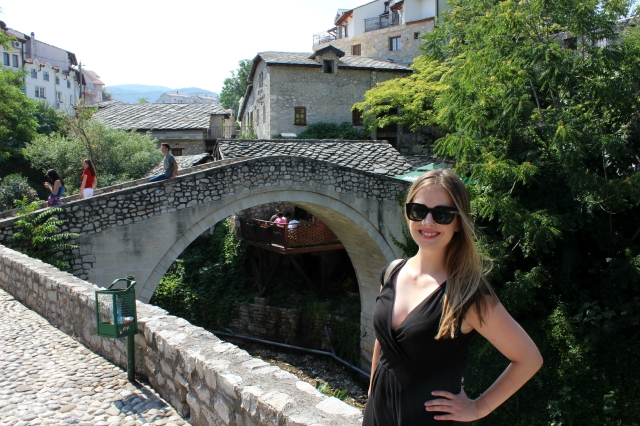 Or if you’re really not into, you know, doing things, there’s Black Dog Pub, a nice little brewpub next to the Crooked Bridge that ended up being a favorite haunt of ours. 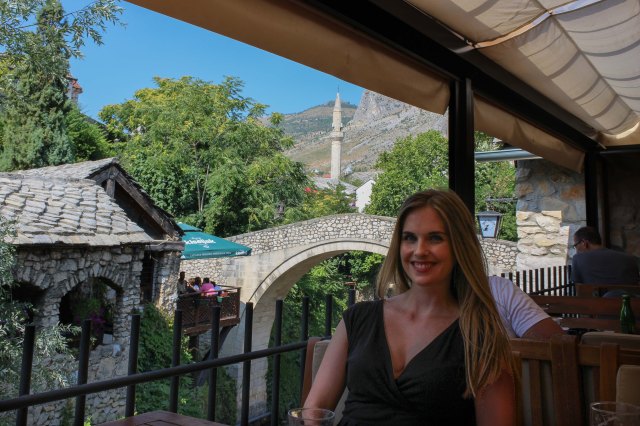 I’ll try to write more about Mostar, including the spooky ruins in the neighborhood surrounding the old town. But we can’t talk about Mostar without talking about the bridge, right?