Casanova and Habibi: Wherein Michelle Gets Hit On by a Camel

Egypt is a big undertaking for most Americans certainly, and probably most Europeans too. It takes some planning, and with the volatile political and security situation, your planning may be all for naught if things boil over again. Similarly, it’s not a cheap destination, requiring long international flights.

Okay, so how did we end up there? Well, we happened to start in Cyprus, and that’s a pretty big leg up. For one thing, the flights are short hops, like going from Minneapolis to Chicago. We had always wanted to go, but we ended up going more or less on a whim for a long weekend.

Tourism in 2016 was down literally 99% as compared to ten years earlier. There are reasons for this, of course, but it also meant that a very nice hotel was easy to find and very cheap for last-minute travel. And if we had to cancel an hour-long flight from Cyprus, that really wasn’t going to be much more than an inconvenience for us.

So we ended up in Egypt.

And, as one does, we also ended up on the back of some camels in the Libyan Desert. 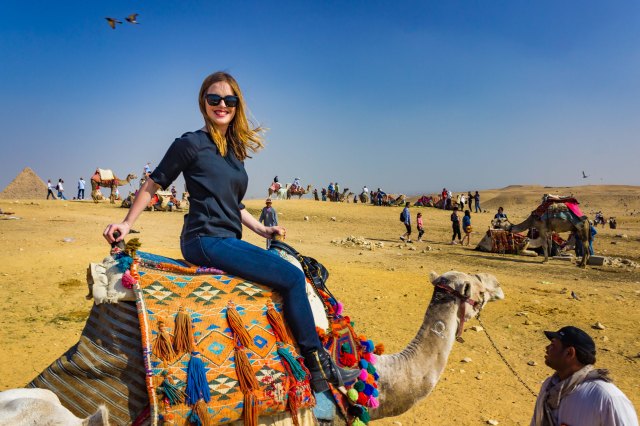 You have to be kind of a good sport about riding camels, because they are awkward beasts, and you can tell that they don’t particularly want to do much but sit around. You mount the camel while it’s sitting with its legs folded under it. The camel driver then whacks its knees with a switch, and with several put-upon grunts, the camel rises to its back legs first, pitching you precariously forward, then to its front legs, daring you to have overcorrected your balance.

And those grunts. Camels make noises that belie a full spectrum of emotions from tired to uncomfortable to unwilling. Kind of like me getting up from the couch.

Fun fact: after returning from our Egypt trip, my getting-up-from-the-couch noises are known around our household as “cameling.”

But it’s totally worth it. Because now I can say that I made out with my wife on top of a camel. So yeah.

I also stood up on one (with encouragement from our Bedouin guide), which I assume not many can claim.

My camel was very patient with me for this maneuver, and he lived up to his name: “Habibi,” or “Sweetheart.” (In case you want to call your wife this, the feminine is “habibti.”) 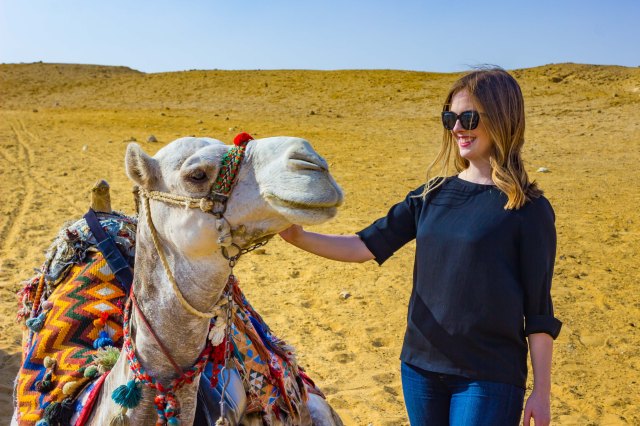 Michelle’s camel, on the other hand, was a little fresh. His name was Casanova. It was appropriate. He was eyeing Michelle all day.

Look at that shit-eating grin.

And there he goes, in for the kiss! Not cool, bro!

Also, it turns out camels have terrible breath. Who knew?

← A Walk (and a Climb) in Split Croatia