How To Get Cell Phone Service In Turkey

In most parts of the world, obtaining cell phone service is as easy as buying a SIM card and minutes/SMS/data and popping the SIM into the phone. It tends to be a bit more complicated in America due to the two-year contract pricing, but T-Mobile has already gone completely away from that, and as far as I know, all major U.S. cell phone providers offer no-contract options now, provided you bring a compatible device. As many long-term tourists, expats, and holders of work visas have found, however, it is slightly more complicated in Turkey. In Turkey, you have to register your cell phone with the government or else the networks will recognize that you are using an unregistered SIM and kick you off.

Good news! It’s very easy to get your cell phone registered and get cell phone service in Turkey, provided you follow these easy steps:

Still with me? Okay, now for what you actually have to do if you’ve decided you’re a glutton for punishment. Thankfully, after getting the requisite papal bull, it’s all down hill.

If you choose not to use a cell phone sold by a Turkish provider – and you have a veritable cornucopia of choice with three whole providers – you can certainly use the GSM phone you’ve brought to Europe. The Turkish government recommends that to save time in the process you whittle your own phone out of hardy oak, but we decided to ignore that advice and went ahead with our iPhone 5s. Your cell phone has something called an International Mobile Equipment Identity (IMEI) number, which is quite easy to get to because the people who design the hardware are American.

Once you have this number in hand, you go to a bank, as per the advice all over the internet, to be told in multifarious ways that you need to go somewhere else. After a minimum of four banks, but no more than six banks, you will be told to go to a government office. After poking into at least two but no more than three government offices, you will find the correct tax office. The tax office will be closed.

When you decide to return, you’ll need to find the office again. It is called the “İstanbul Vergi Dairesi Başkanliği / Beyoğlu Vergi Dairesi Müdürlüğü,” which is helpfully easy to remember. It is here that you will make your first cash payment, because credit cards are for girly-men. For two phones, we paid TL263; conveniently we had TL265 in our pocket. Do not forget to bring enough cash! If you do, you will be sent to the ATM in the lobby, ten meters away, to withdraw the correct amount.  When you return, the tax office will be closed. (Ten meters, incidentally, is not-American for “the distance from the pitcher to the catcher and half again.”) 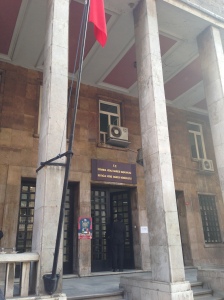 When it opens again after several weeks, you will hand over your cash and get a dot-matrix form printed off saying that you handed a man some money. Internet research indicated to us that at this point we could venture into a cell phone store and get on a network. After meeting the minimum of banks and government offices, you are indeed ready to go to a cell phone store. Just not that one. Nope, not that one either. Oh, you’re looking for the right store on Google and/or Google Maps? Cute.

We were sent into the Straw Mat Weavers’ Market, memorably called Hasırcılar Çarşısı, by Google Maps, only to find that the only listed address for a particular provider’s store is geographically equivalent to the location of a stone wall in a two meter wide service alley. (Two meters, incidentally, is not-American for “roughly one Peyton Manning tall.”)

When you leave the most crowded place in Istanbul, where Google Maps helpfully sent you, you will notice that it is literally the only place in the city where your provider’s cell phone stores are not present. Upon extricating yourself from that mass of humanity, you will immediately walk past at least two that you didn’t notice on the way in. Eventually you will go to a minimum of seven stores, but no more than nineteen, several of which will be capable of helping you but whose employees will decide that there is too much paperwork and send you to “the other store.” Where is the other store, you ask? “Oh, somewhere by Taksim.” You may get a different response, but you get bonus points if you are directed to a different continent.

You may get a little frustrated here. You may decide, despite the attractive plans at your chosen provider, that you may get better customer service elsewhere and that you will attempt to find a phone plan at one of the many, many cell providers in Turkey. After failing with both of those, you will eventually find a store willing to help you. You get bonus points if said store is less than 300 meters away from the first store you went to back when you were still comfortable with your naiveté. (300 meters, incidentally, is not-American for “three football fields or so.”)

When you find employees willing to help you, you will be told that there is a registration fee, despite the registration fee that you have already paid at the İstanbul Vergi Dairesi Başkanliği / Beyoğlu Vergi Dairesi Müdürlüğü, whose name I’m sure you remembered. This is somewhat disconcerting, but she speaks several words of English, so what could go wrong? You part with 100 more TL, and the process can begin. Do not forget to bring enough cash! If you do, you will be directed to the ATM across the street, no more than twenty meters away. When you return, all of the employees will be on tea break. (Twenty meters, incidentally, is not-American for “approximately a swimming pool long.”)

Finally, things are happening! Paperwork is being inspected. Contracts in foreign languages are being signed without having been read. Passports are being photocopied. (Within weeks, half the Turkish population will be in possession of a photocopy of your passport.) You’re in the clear! All you need to do is provide them with your Turkish phone number. What’s that you say? You don’t have a Turkish phone number? That’s why you came into the store in the first place? Oh dear.

Not to worry. You can simply shovel some cash at them to buy a new SIM card with a Turkish phone number that is 14 digits long for some reason, and you’ll be right back on the paperwork train where you belong. Do not forget to bring enough cash! If you do, you will be directed to one of the many ATMs no less than thirty meters away to grab some. When you return, all of the employees will be on smoke break. (Thirty meters, incidentally, is not-American for “one basketball court long.”)

Okay, you’ve got your SIM, your passport has been multitudinously photocopied and handed out to various passersby, your tax forms have been ignored as apparently unnecessary, you have signed several deals with the devil written in Turkish, and now you are ready to get cell phone service! Woo! Oh wait, you can’t get that yet. Your provider’s network will need to recognize your SIM, and that process takes roughly one hour, according to the cell phone store employee. You will then return to the cell phone store after one hour and be told that it is actually one week.

At this point, you may consider giving up. This may be doubly true if, when you return home that night, you walk by one of your provider’s cell phone stores literally three blocks from where you live and immediately have flashbacks to the Google Maps/Hasırcılar Çarşısı fiasco.

This may be triply true if you realize that, while you could have bought two phones and two plans for 320TL, or about $155 all-in, your current layout stands at 441TL, or about $210.

This may be quadruply true if you further realize that you have not yet bought a plan.

And that you still don’t have service.

So here we are, back to where we started. Are you paying attention? If you want to register your own cell phone in Turkey, please, for the love of all that is holy, follow these steps:

← The Modern Gargoyle
The ever-present call to prayer →