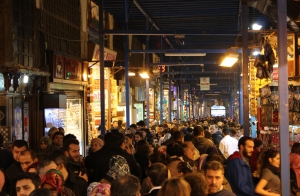 I’ll admit to never having read Thomas Hardy’s “Far From the Madding Crowd,” but I am fairly certain it was not about any of Istanbul’s bazaars. On a rainy weekend day that might otherwise have been spent traversing city walls, Michelle and I decided to do something a little more indoors, so we sought out some bazaars, including the straw mat weavers’ bazaar next to Rüstem Pasha Mosque, which we had been to in our previous cell phone adventure, the Egyptian Spice Bazaar, and of course, the Grand Bazaar. 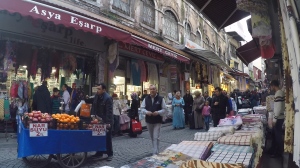 Valide complex is a smaller mosque called Rüstem Pasha, built by the great Mimar Sinan in the 16th century. It can be easy to miss what with the 17th century Yeni Valide Sultan next door and Sinan’s own Suleymanie Mosque towering above it on a hill just south. But Rüstem Pasha is worth a visit in its own right, especially to see the intricate tilework, and its immediate environs house the Straw Weavers’ Market, or Hasırcılar Çarşısı.

This market is largely outdoors, but covered by awnings over narrow, maze-like streets, and it’s a very endearing place when you’re not being misled by Google Maps. True to its name, it has many stalls selling brooms, baskets, linens, towels, and the like. However, it has plenty of variety in its merchandise, to go along with nice little tea shops and a few restaurants and food sellers. When you’re settled into the city and done touring the bigger bazaars, you may decide to do some real shopping here. It is full of locals, there were very few pushy people, and it seemed like an overall more authentic market experience. A note: you will get lost, so bring a GPS-enabled phone, or at least don’t make any pressing appointments for just after your visit. 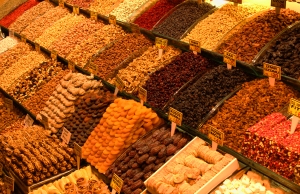 The Mısır Çarşısı, or Egyptian Bazaar, I am told was so named because it was built using tax revenues taken from Egypt, under Ottoman control since the 16th century. It is also called the Spice Bazaar, which is largely self-explanatory. However, I was expecting to be overwhelmed by spices, herbs, teas, dried fruit and nuts, and things like that, but I was somewhat disappointed. Not that they’re not there, but the bazaar is now filled with the same shops that you’ll commonly find in the Grand Bazaar – tileware, lamps, souvenirs, sweets, rugs (shudder), along with the expected spices. Perhaps it was more focused in earlier years, but not now. It is a great deal more manageable than the Grand Bazaar, however, being a good deal smaller, and it’s just down the street from the Hasırcılar Çarşısı in Eminönü, so it’s very easy to get to.

We made our only purchase of the day in the Egyptian Bazaar too. We are not particularly acquisitive at this point in our lives. Possibly a result of our moving-out misadventures, we’ve developed an aversion to the “stuff” that somehow manages to attach itself to lives without the conscious knowledge of the living. So naturally we preferred comestibles, and we decided to make our shopping experience a pleasant one. It can be done in the big bazaars.

If I may offer advice to the potential bazaar shopper, there are several things to do to make your shopping experience more pleasant. First, acquaint yourself with the shops before you decide which one you’d really like to browse. Go up and down the streets, make note of what looks nice, avoid eye contact with the pushy salesmen, and just generally have a look around. Next, choose a seller whose salesmen are not pushy, corny, or desperate. I know that this may be hard to do, but there are some polite salesmen in the big bazaars. While this may be personally useful by making you feel better about the autonomy of your purchase, I view it as something of a public service. If the pushy salesmen didn’t get results, they wouldn’t do what they’re doing. Don’t feed the beast that makes shopping unpleasant and you will be doing everyone else a favor too.

Finally, and most importantly, allow yourself to be catered to. At this point you should know what you want, and you should have a general idea of how much it costs and/or how much you’re willing to pay. In the shops selling baklava, lokum (Turkish delight), teas, and sweets, this tends to be easy because there isn’t much haggling that’s necessary. You can do it, of course, but you aren’t buying anything terribly expensive, and sometimes there will be prepackaged fixed-price food items that give you a general idea of what’s fair. But don’t dive in right away! Turkish hospitality extends fully to buyers. If you show yourself willing to buy something, you’ll be treated to comfortable chairs (space permitting), a glass of tea, English conversation, and many free samples. In my opinion, there is no reason to rush this part. Have some pomegranate lokum and rest your legs. We walked out with lokum and four kinds of baklava. It wasn’t terribly cheap, but it was an overall fun experience, and the sweets were pretty amazing. 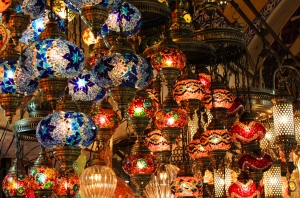 Kapalıçarşı means the “enclosed” market, which was a little confusing to me at first, since kapalı means “closed,” as in not open for business. I can assure you, however, that the Grand Bazaar is open for business. It’s open for business whether you want it or not. I fully condone touring the Grand Bazaar without buying a single thing; I’ve done it myself, and I don’t feel guilty. But the salesmen on quota will do whatever they can to get you to buy some of whatever they’re selling, and they can be a little too insistent about it. Furthermore, prices are generally not marked or offered except at a few shops, and the shop owner holds all the relevant information. How much should a decorative glazed plate with Ottoman calligraphy sell for? I don’t know. Would you? I guarantee you the shop owner does, though, down to the penny. Americans especially may overestimate the actual value of what they’re looking at, accustomed as they are to American prices. Even the best negotiators might talk the salesman down 50%, 60%, or maybe even more, and still end up overpaying. I tend to think that this makes the Grand Bazaar a nice tourist stop, but not a practical place to actually buy anything.

A word about the negotiation. This can be a fun game for some people (not for me; I don’t like saying no), and it’s at least an interesting experience, though sipping tea and trying free baklava samples rates higher on my “experiences” list. If you’d like to try it, I would suggest at the very least to be unconcerned about whether you’ve gotten the very best deal. You probably haven’t. But if you’re happy with your purchase and you don’t think you’ve paid more than it’s worth, you should probably leave it at that. As a general rule, the salesman will attempt to get you to make the first offer. You don’t need to get cute by offering 1 lira, but you should be insistent in asking the price. If you don’t get an initial offer, head toward the door and see what happens. In fact, heading toward the door is really the first bullet in the negotiator’s chamber. 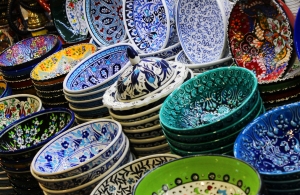 The first price you are quoted is not one you are expected to pay. Your counteroffer is more important, however, because as a general rule, any offer you make is binding on you. Feel free to lowball. You don’t have to offer your best realistic price immediately. In the end, you should always respect any offer that you’ve made, you shouldn’t be cowed into paying more than the product is worth, and you should always feel like you can walk away because you can. And again, I would suggest walking immediately away from pushy salesmen, especially the ones who don’t seem able to distinguish polite greetings from pickup lines. Saying “you look just like my next customer,” or “how can I take your money today?” may be cute once or twice, but it’s grating before too long.

Bazaars are fun, especially if you’re only looking. (I love the antiques section in the middle!) Tourists should absolutely go see them. But living in Istanbul shouldn’t furnish much practical use for the big bazaars. There is an incredibly stark contrast between polite, friendly, hospitable Turks running their own small shops on side streets and the slicked-hair, line-slinging salesmen of the Kapalıçarşı. I much prefer the former.

← Byzantine Istanbul Part I: The Column of Constantine
The Life of the Linguistically Deficient: Getting a Haircut in Turkey →