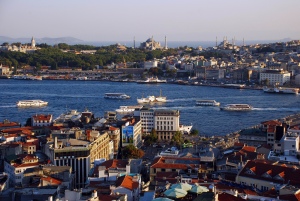 The view that awaits us from atop Galata Tower. Photo credit: Tania Ho.

Here are some of the things that I (Michelle) would like to do in Turkey, now that I’ve finally gotten around to typing up my additions to the bucket list (which I’ve also added to our bucket list page):

← Byzantine Istanbul Part IV: The Church of Theotokos Pammakaristos
The day we wandered through a Turkish cement plant and into the wilderness →