The Life of the Linguistically Deficient: Getting a Haircut in Turkey 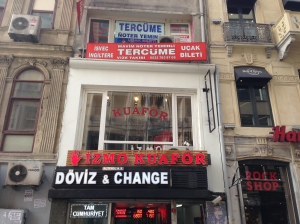 Given my admitted linguistic limitations, getting what I want in Turkey is difficult if I can’t point to whatever it is. This was expected to make getting a haircut a daunting challenge. At least until I got a haircut. The whole process was made very easy by my kuaför. Incidentally, this is one my favorite Turkish loanwords, and it is pronounced exactly as coiffeur would be.

I did use my handy technological aids to grease the skids a bit, learning how to say “I would like a haircut,” figuring out what the metric equivalent of a #4 clipper guard is (about 120 mm), and looking up some words and phrases I thought might come up. Upon entry, I was immediately seated by the kuaför, and I attempted to explain what I wanted, by pointing at the clipper guard and saying “120 millimeters,” then for some reason pointing at the sides and back of my head and unnecessarily making motions with sound effects: bzzzzt, bzzzzt. As if he didn’t know what I was getting at. Then I pointed at the top of my head, said “three centimeters,” and made scissor motions. Mercifully, I decided to forego the sound effects the second time.

This display finished, I looked at the kuaför in the mirror. He looked back at me with his eyes and his mustache as if to say, “don’t tell me my business, son.” After a brief nod, he began the process. As with most haircuts, the first order of business was lighting a cigarette. Okay, the cigarette put me on edge a bit, but he did seem to get the correct clipper guard, so I decided against the eject button.

Now, I generally don’t pay more than $10 for a haircut in America, because the subtle difference between a reasonable haircut and a great haircut hardly registers in my mind, and the damn stuff grows back anyway. That said, I have had great haircuts, and even greatly expensive haircuts, and I can tell the difference between a churn-and-burn barber and an artist. And let me tell you, the kuaför was an artist. Some later research clued me in that barbering is taken very seriously in Turkey, with an apprenticeship system that sometimes lasts for years before aspiring stylists can even touch a scissors. I believe it. And the best part? I paid 25TL. About $10.

When the haircut was finished, I was treated to a scalp massage, shampoo, and conditioning, with my head leaned over the sink. He did not skimp on the massage, and that included my face, which isn’t something you can expect at Supercuts. The later styling part was also extensive, although my recalcitrant hair ended up back where it always is after a few hours. I later read that haircuts often extend into straight-razor shaves, eyebrow sculpting, and even ear hair incineration via butane torch. Thankfully, I avoided these. Still, my experience was overall pleasant, and I got a great haircut for not very much money from a kuaför with a great mustache. I’d call that a success.