In the northern reaches of Greek Cyprus, a stone’s throw from the UN-imposed “Green Line,” separating Greek Cyprus from Turkish Cyprus, there is a village called Nikitari. About three kilometers south of Nikitari, the intrepid traveler – who has braved mountainous terrain, narrow roads, and a steering wheel on the wrong side of the car – will find the Church of Panagia Phorviotissa. And the traveler will be rewarded for his perils.

The church is also called Panagia tis Asinou, which derives from the name of the ancient village founded nearby by settlers from Asine, a city in Argolis named in Homer as among the possessions of the formidable Diomedes. Somewhere over the years, Asine morphed into Asinou. 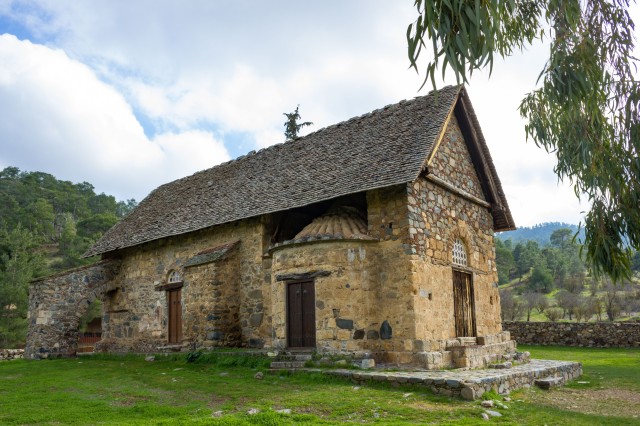 This church belonged to a monastery since fallen into disuse and then complete ruin: the monastery “of the Phorvia [or Phorbia],” which is probably derived either from a wild plant called “ephorbium” or from “phorbe,” or pasture. Many appellations of Mary in Cyprus derive from the natural world. If Panagia Phorviotissa tis Asinou is too much of a mouthful for you, try Our Lady of the Pasture. Just don’t expect to find that on Google Maps. 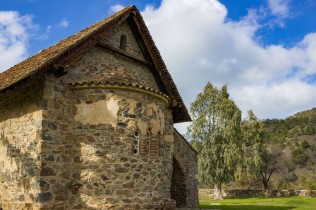 Still in its original form after so many years, the structure dates to the Byzantine period of the 12th century, and the entirety of the inside of the church is painted with frescoes in the Byzantine style, dating from the beginning of 12th century. There is a dedicatory inscription over the south entrance of the nave attributed to a Nikephoros, who was a Magistros, probably a judge or tax official. This inscription, and the depiction of the very same Nikephoros presenting a model of the church to Mary, help to date the church to the early part of the 12th century, before the Latin occupation beginning in 1191.

Still more useful is the further inscription, also from Nikephoros, below the paintings of Constantine and Helena with the true cross shown here. The Greek is decorative, and very difficult to parse, but it is possible to follow along. Start at the bottom left of the picture and see if you can pick out “Nikephoron Magistron.” In translation (for which I have an official source, so we won’t have to rely on my shoddy Greek) it reads: “The Church of the Holy Mother of God was painted through the donation and great desire of Nikephoros Magistros the Strong, when Alexios Komnenos was emperor, in the year 6614, indiction 14.” Conclusively, then, the paintings were made sometime during what our calendar would call 1105-1106. 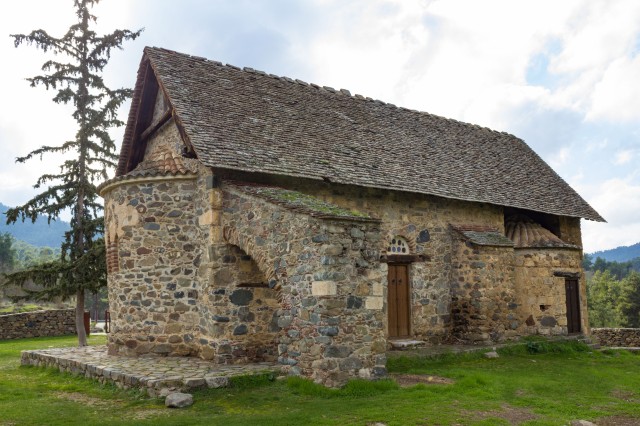 About two-thirds of the original decoration remains, and some of the original works have been uncovered from additions, including an Annunciation in the apse. The vault is covered with incredible paintings of the main feasts of the church, but they are probably not dated to the time of Nikephoros. Rather, they are probably from between 1350 and 1450 or so, though experts have not come to an agreement.

Starting from the south, one can see the Nativity, the Presentation, the Baptism, and the Transfiguration, or Metamorphosis. The baptism scene shows a personification of the River Jordan, as is customary, but this depiction gives the Jordan wings, and has been called “devilish.” Quite often the personification of the River Jordan in Byzantine art followed the style of the depictions of older Hellenistic river gods, but this is certainly a bit of an outlier. You can see the depiction at the bottom left of the photo.

On the north of the vault the series continues with the Betrayal, the Via Crucis, the Crucifixion, and the Entombment. The cycle continues in a lunette with the Resurrection, and finally the Anastasis, which contains a curious error: behind Adam and Eve stands their son Abel, but in this church, the inscription reads Cain! Apparently errors weren’t uncommon in the late Byzantine period, but this one sure stands out.

The narthex mostly contains paintings dated to 1332-1333, according to another helpful inscription. The narthex also contains a lunette with a picture of the Virgin Mary, in the style of the Blachernitissa from Constantinople. However, this Mary also bears an inscription with the appellation “Phorviotissa.” This may mean that the church took on the name some time after being built. 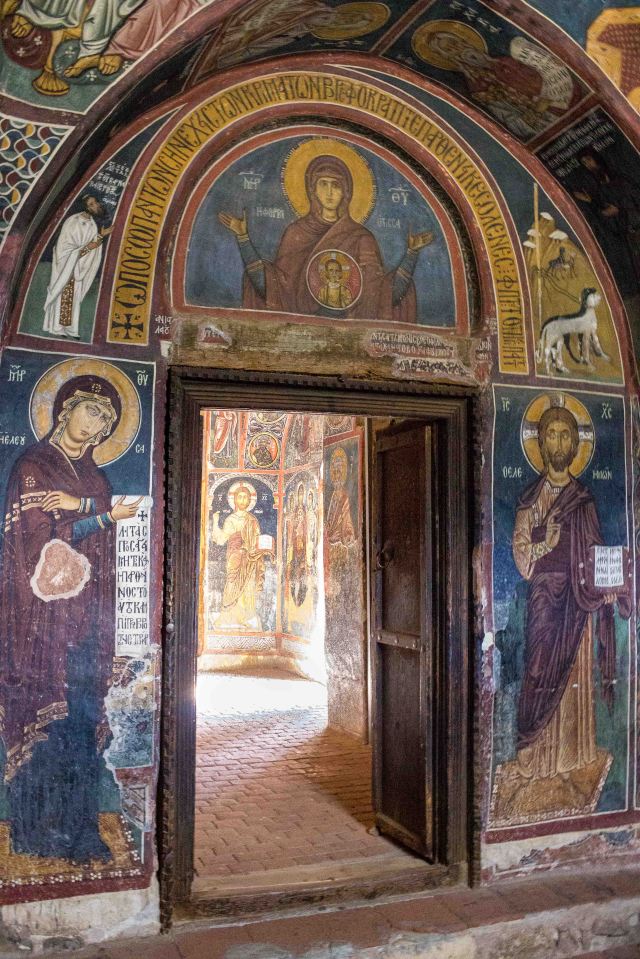 Next to Mary is another oddity: a depiction of two hunting dogs, white and black, tied to a stake with two mouflon (rams) on the hillside behind, which can be seen in the photo to the right of the lunette. This may be an allusion to the founding of the Monastery of Kykkos, where the Doux, or Duke of Cyprus, Manuel Boutoumites encountered a holy hermit while hunting mouflon in the mountains above Nicosia. That story gets a bit lengthy and is best told when I get around to posting about Kykkos, but that monastery and the Panagia Phorviotissa are contemporary structures, and art experts are convinced that some of the artists who were brought from Constantinople to work on Kykkos also worked on Panagia Phorviotissa. In any case, this may be one of the only places in the Greek Orthodox world you’ll see a depiction like this. Maybe even the only place outside of Kykkos itself, and they don’t allow pictures.

The church also contains a startling Last Judgment, with vivid scenes of hell and its sinners. This extends into the north apse semi-dome, on which are personifications of the land and the sea, riding a lion and a whale (?) respectively. If you’re following along in Greek, you can see that the figures are named – “i gi” and “i thalassa.”

This is just an overview of one of the many Painted Churches of Cyprus, and I have many, many more pictures from my wanderings all over the island.I am planning to continue sharing them, so keep checking back.

← Peterskirche, the Baroque Church of St. Peter in Vienna
A pub crawl that led us to the top of a Bulgarian mountain →