Traveling as a lifestyle affords plenty of opportunities otherwise unavailable, but maybe not as much as the simple power of “yes.” As an introvert, I would tend to accept quiet nights in without much fuss. As someone married to an extrovert, I hardly get the opportunity. But when the couch is calling your name, it can be best to say “yes” to whatever other offer comes your way. This time, saying “yes” to a pub crawl in Bucharest, Romania led us to an abandoned cable car station on top of a mountain in Sofia, Bulgaria.

Not in the same day, and, to be fair, the pub crawl was a massive failure. But continuing to say “yes” didn’t just get me off the couch. In this case it got me a unique experience in a place tourists like us hardly ever see.

Michelle and I signed up for a pub crawl in Romania, which we’ve found in other places to be a great way to meet other English speaking expats, nomads, and tourists in a laid-back environment. The problem was that no guide ever showed up. There were several of us waiting around until well after the meeting time, and while some simply drifted away, extroverted Michelle struck up a conversation with some friendly Bulgarians, and before I could throw a wet blanket on things we were putting together our own ersatz pub crawl in the Old Town. 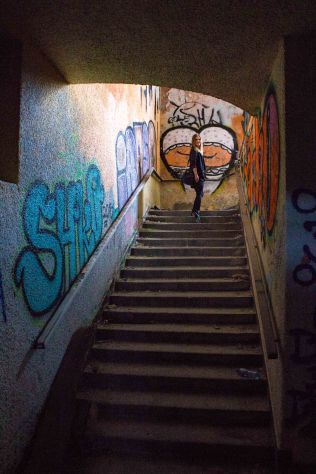 And not only did our new friends speak fluent English and indulge our questions about Bulgaria, it turned out that Christian had spent several summers working in Maine. He was even wearing a New England Patriots t-shirt under his jacket. By coincidence, I was going to Sofia in a few weeks for a conference, and so when we were invited to meet them again, the only answer that made sense was, of course, “yes.”

And we are happy to have said yes, because we got quite the local tour of Sofia. One of the highlights was Vitosha Mountain, quite close by, but not as well served by transit as the rest of the city. And on top of Vitosha sits an abandoned Soviet-era cable car, which is not in any guide book I’ve ever seen. Vitosha is a popular place for (working) cable cars, it has a river of stone the likes of which I’ve never seen, and the TV tower called Kopitoto at its highest point commands incredible views. But this abandoned cable car was unique. 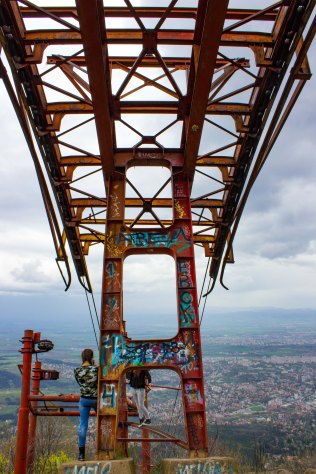 And it was hauntingly beautiful. Christian described it as a typical Soviet project – it was done at the orders of somebody with enough political influence to make a large public-works project happen, but it was done without any thought as to whether the public wanted it or would use it. And when Communism fell and political influence stopped being the only currency that mattered, the real money ran out. Quelle surprise, the public didn’t want it and didn’t use it. 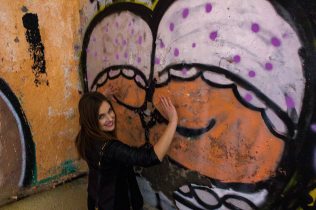 What’s left is a reminder of the poor ways humans have addressed scarcity, embodied in rusted-out hulks of machinery, broken glass, and some striking – and at times quite amusing – graffiti. (Sorry for the picture, those who speak Bulgarian!) Exploring this cable car station near the top of Vitosha was an incredible experience, and we have our Bulgarian friends to thank for it, as we would never have found it or been able to get to it otherwise. And I think I have “yes” to thank for our Bulgarian friends.

Maybe I’ll keep that in mind next time I’m deciding whether I want to get off the couch.