Mexican Baroque in the State of Oaxaca

During our time in Oaxaca, we hired a driver and guide to take us out of the city to see some of the rest of the state’s sights. One of our stops was a city called Tlacolula (technically Tlacolula de Matomoros, like Oaxaca city is technically Oaxaca de Juarez). Tlacolula is a Zapoteco word meaning “place of abundance,” and fittingly it’s best known for its Sunday market. In Oaxaca state, there is a large market every day, which rotates cities. Tlacolula has Sundays, and it is a fascinating chaos. I’ll post some pictures from that market at some point.

In the meantime, I’d like to post some pictures of the parish church of Tlacolula, or specifically the 17th century chapel attached to the bigger, later church. It is called the Capilla del Señor del Tlacolula, and it is a great example of the colonial Mexican baroque style.

This style is noted for its ornate, gilded plaster work. Pretty plainly visible here. Less visible, though, are the mirrors, which are mounted along the bottom of the barrel vault ceiling; you can see them in this photograph, but they look like paintings. In fact, they are highly-polished mirrors, put there to reflect as much sunlight as possible from the few windows in order to light the church prior to electricity. They also did not want to light candles, primarily for fear of catastrophic fire, but also because smoke would quickly damage and discolor the plaster.

They don’t joke around about their decoration here. Notice one of the mirrors prominent in the shot above.

You may also notice that there’s quite an emphasis on the suffering of martyrs here. It’s graphic to the point of gross. St. Peter is crucified upside down, St. Andrew is shown with his X-shaped cross, St. Paul is shown with his head sitting next to the rest of him. It’s all quite grisly, really.

The theme, however, may make quite a bit of sense, given pre-Columbian Mesoamericans’ penchant for bloodshed in the name of deity placation. I think perhaps the cute little Christ child didn’t resonate with their religious sensibilities so much as did the martyrs whose deaths were considered honorable and noble, much like the human sacrifice victims of pre-Columbian Mesoamerican religions. Incidentally, I have no historical evidence to back this up; but given how the Church has consistently adapted itself to preexisting traditions in much of the rest of the world (Christmas trees, Easter eggs, All Hallows Eve, etc.) it makes some sense to me.

Back in Oaxaca de Juarez, there is another church, Templo de Santo Domingo de Guzman, that exhibits very similar Mexican Baroque. However, it is on a much bigger scale. 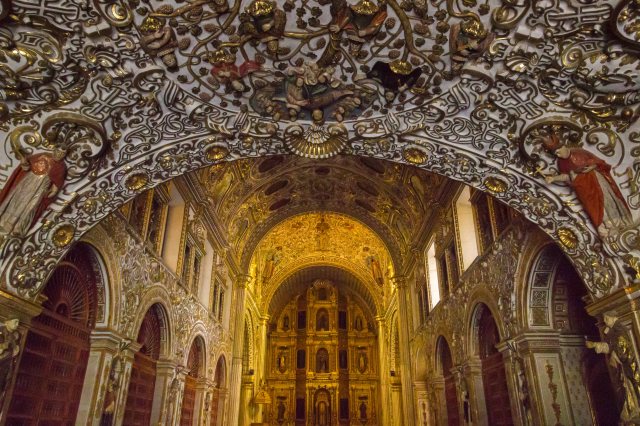 Santo Domingo was begun in the late 16th century, but it took about 200 years to complete. There was an attached Dominican monastery which now a fairly comprehensive museum. The church actually served as barracks during the revolutionary years, and there is a purpose-built cavalry barracks and stable right next door, which is now a botanical garden.

The light here is quite low, even now with electricity, and although Santo Domingo has bigger windows than Señor del Tlacolula, I can’t imagine it would have been very bright in the early going. Of course, that did not stop the baroque craftsmen from their intricate and well-wrought plaster work. 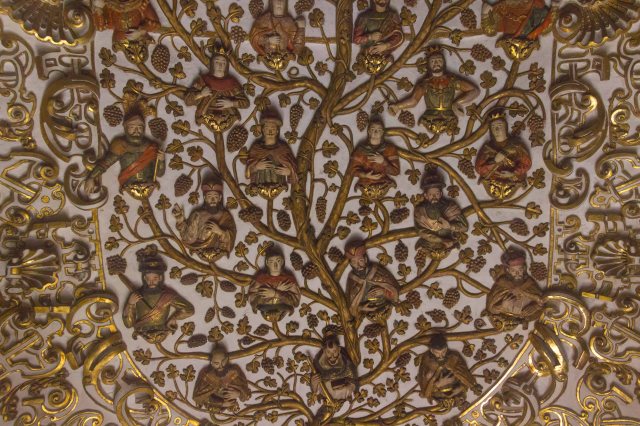 Above the main entrance is an intricate depiction of a family tree with the holy family at the top, probably the tree of Jesse.

From there it opens up into a large church with big vaulted ceilings, all ornately decorated. Here there was less emphasis on blood and guts, as compared to Señor del Tlacolula, but St. Dominic was prominently featured, as would be expected. 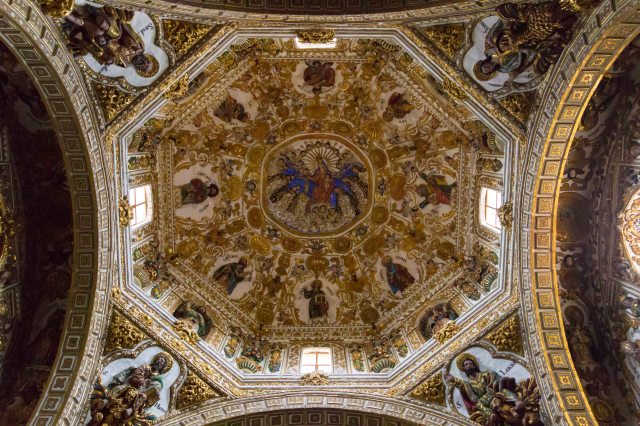 And let’s not forget the dome. At the top Mary is seated with the Christ child.

The barrel ceiling is very impressive…

…leading to a gilded altarpiece. Apparently the interior, which was totally restored in the late 1990s, used 60,000 sheets of 24 karat gold leaf.

And of course, what Mexican church would be complete without a depiction of Our Lady of Guadalupe?

There’s also an interesting statue of Juan Diego (now St. Juan Diego despite there being no evidence that he ever existed), during the revelation of the image of Our Lady of Guadalupe to the bishop (who was a prolific writer and yet never once mentioned this miraculous incident).

But I certainly don’t let historicity concerns keep me out of churches like this. History aside, you can’t really argue with the artistic merit, the cultural heft, and iconic nature of churches like Santo Domingo.

Although I personally think the inside is where the fun is, I’d be remiss if I didn’t include at least one picture of the outside of the church. You can see that it’s very imposing, and it dominates a square to the north of the Zocalo.